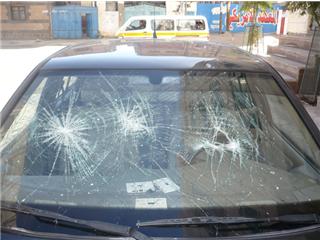 Unknown men attacked the car of the Yemen portal’s office in Sana’a on Sunday, breaking the front glass of the car before escaping.

The witnesses could not take the number of the car but one of them said he saw the picture of the president Ali Abdullah Saleh at the back of the taxi.

It's worth mentioning that this attack happened one day after the blocking of the website of Yemen Portal net substitute after the authorities blocked the first website.

Meanwhile, director of Yemen Portal Waleed al-Sakaf demanded the authority to take the steps required for following the attackers and bringing  them to justice.

Also, he appealed to the Yemeni Journalists Syndicate and the organizations interested in topics of freedom and human rights in Yemen and the world to be in solidarity with the Yemen Portal.
It's worth mentioning that the World Association of Newspapers appealed to Yemen president Ali Abdullah Saleh to order his government to unblock about eight Yemeni websites which were recently blocked by the government internet provider.

Three unidentified men attacked and shattered the front glass (windscreen) of the vehicle operated by
YemenPortal.net's office in Sana'a, Yemen just before midnight on Sunday, February 10.

This comes after a third alternative website domain was set up in a record time after the Yemeni
authorities banned the website's domain for the second successive time. This resistance to the block may
have been the motive behind the attack, the website founder and administrator Walid Al-Saqaf said.

"We expect the authorities to go on blocking the third domain, after which we will simply launch a
fourth. This will go on for as long as it takes." Al-Saqaf noted.

The attack also comes in a time YemenPortal.net is leading a country-wide campaign against blocking
Yemeni websites. The initiative was to allow all Internet users in Yemen to access the full content of all
blocked news and opinion websites, which are accessible through the campaign's website
http://yemenportal.net/blocked. The authorities had initiated a new wave of bans against political
websites without disclosing any reasons.

Al-Saqaf noted that eye witnesses said a taxi driver and two passengers, of whom one was masked,
suddenly stopped near the car and kept on smashing the windscreen with rocks until neighbors started
approaching. Then they returned to the taxi and quickly fled the scene.

None of the eyewitnesses were able to read the car's plate number but some noticed a portrait of
President Ali Abdullah Saleh on the back window of the taxi.

A complaint was filed at the closest police station immediately after the attack, which is believed to have
been in response to the website's successful initiative in launching the first anti-blocking campaign of its
kind in Yemen.

It is worth noting that the authorities have in the past used various methods and means from sending
SMS messages to beating journalists or smashing vehicles. "This is far too familiar", Al-Saqaf said,
adding that "If the attack is intended to threaten us or send us a message of intimidation, I would like to
stress that it only strengthens our position and encourages us to continue our mission of fighting for the
unblocking of more than a dozen websites that are banned by the authorities."


Concerned human rights and press freedom organizations in Yemen have pledged to take action to
condemn this attack and call upon the authorities to investigate the incident promptly and bring the
perpetrators to justice. They also stressed on the need to release the blocked websites, whose ban
constitutes a major violation of the Universal Declaration of Human Rights, which was ratified by the
Yemeni government.

"The recent attacks against the press in general and the online media in particular lead us to believe that
the government's inaction in the past have encouraged some elements to attack journalists and media
professionals with a sense of immunity." Al-Saqaf said.

"The wave of website bans and other types of intimidation against the online media is in clear
contradiction to the government's pledges and commitments to bolster freedom of expression. We call
upon the government to respect those commitments and urge the international community to help us
resist this unprecedented wave of attacks."